Several months ago I posted about a brand new initiative that I am co-organizing at the annual meeting of the Institute for Biblical Research, along with Elizabeth Robar, who is a research fellow at Tyndale House, Cambridge. Last year we collaborated to establish the Linguistics and the Biblical Text research group, an initiative that was formed out of our desire to establish a regular setting for charitable interaction among scholars working in or with linguistic theory and the scriptures. END_OF_DOCUMENT_TOKEN_TO_BE_REPLACED 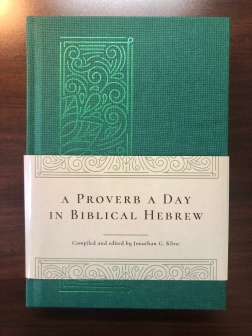 Having recently co-edited the Reader’s Edition of the Septuagint, it probably comes as no surprise that I am an advocate of well-produced texts to cultivate learning and appreciation of the biblical languages. So I was excited to see yet another volume from Jonathan Kline suited for that very purpose. Kline has already put together a series of biblical language books that I recommend to students. And this new book, A Proverb A Day In Biblical Hebrew (Hendrickson 2019) is yet another excellent resource to help keep students, pastors, and scholars in the Hebrew text. END_OF_DOCUMENT_TOKEN_TO_BE_REPLACED

I am pleased to see a new article of mine published in the current issue of the Journal for the Study of the Old Testament. The article is entitled “David’s spiritual walls and conceptual blending in Psalm 51” and the abstract is as follows:

Owing to the apparent topical disjunction of the final two verses of Psalm 51, many commentators consider them a later addition, particularly given the attitude toward sacrifice and the reference to Jerusalem’s walls. By taking a cognitive linguistic approach, particularly applying Fauconnier and Turner’s theory of conceptual blending, this article demonstrates the unity of the Psalm as a discourse unit. Additionally, this article builds upon literary structural analyses of others to suggest the complementarity of the cognitive linguistic and literary approaches. This analysis of Psalm 51 as a whole demonstrates that, not only do vv. 20–21 cohere with the entire psalm, they do so by interacting with vv. 18–19 to build meaning from a single conceptual blend network, one that depends upon the conceptual structures prompted by the narrative setting throughout the discourse. On this reading, David himself is Zion/Jerusalem whose damaged spiritual walls require restoration by Yhwh as a builder.

I am afraid I cannot post the actual published version due to the ridiculous copyright practices of academic journals. But I can break down some of the jargon a little bit and give away the punchline.