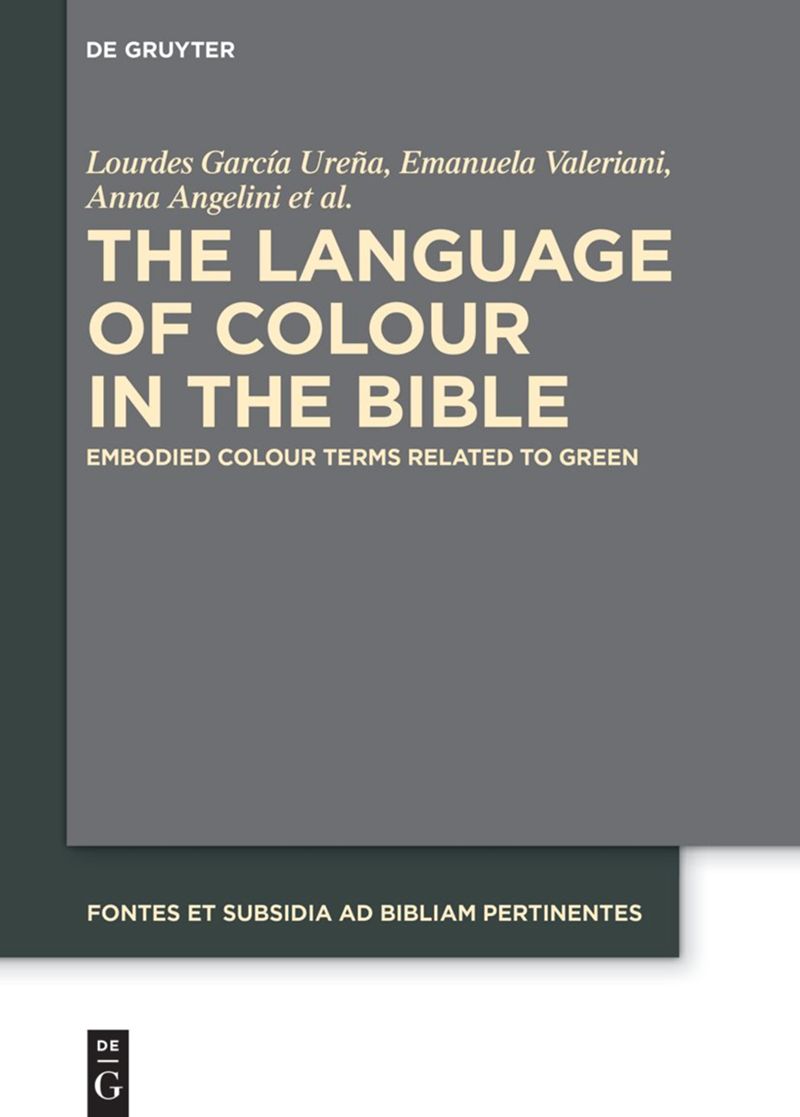 Today I want to draw attention to a fascinating new book dealing with linguistic theory and biblical lexicography, two areas of research that are near and dear to my heart. This volume, entitled The Language of Colour in the Bible: Embodied Colour Terms Related to Green, was edited by a team of scholars that includes my friend and colleague in philology, Anna Angelini, who was kind enough to send me a copy.

The volume was produced through The Language of Colour in the Bible study group based at the University of San Pablo (also here). Although the title may tempt you to think that this is a very narrow topic, in fact it touches on quite a wide array of issues. For one, there is the matter of biblical interpretation in general, and reception history more particularly. As the editors put it:

Colour is present in the biblical text from its beginning to its end, but it has hardly been studied, and we appear to have forgotten that the detailed study of the colour terms in the Bible is essential to understanding the use and symbolism that the language of colour has acquired in the literature that has forged European culture and art.

With that in mind, the editors articulate their goals clearly, and these are “to provide the modern reader with the meaning (both literal and symbolic) of the colour lexemes found in the biblical corpus (in Hebrew, Greek, and Latin), and thereby approximate the worldview of the listener/hearer in biblical times” (p. 29). Of course, approaching this kind of study requires some sort of theoretical framework, method, and practical outputs, and this volume has all three.

As for theory, I was very pleased to see Cognitive Linguistics brought to bear in this project. There are numerous points of overlap between the scholars involved in this volume and the ongoing Diccionario Griego-Español del Nuevo Testamento project, which is being carried out within a structuralist framework. (See my RBL review of a relevant volume here.) As the editors of The Language of Colour in the Bible rightly recognize, however, that approach, while effective for some tasks, presents “insurmountable obstacles for the study of colour language” (p. 22). So instead, the editors chose cognitive linguistics as their theoretical framework, which was (in my humble opinion) the correct decision. (If you’re interested, a classic discussion of color categories from a cognitive linguistic perspective is the first chapter of John R. Taylor, Linguistic Categorization.)

On top of good theory, this volume also has solid practical lexicographic practice as well, with well structured essays/entries, detailed (Hebrew, Greek, and Latin) philological analysis, definitions (not just glosses), and even the occasional full-color image. Two of the overarching conclusions are articulated in the last chapter, where the two essential characteristics of color language in the biblical corpus are described as:

My hearty congratulations to the editors for this excellent volume. I can only hope others of similar quality will follow in due course.