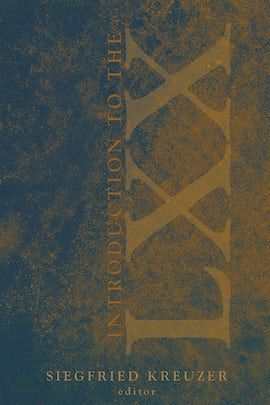 It’s great to see the appearance of a new volume for the field of Septuagint studies, this time from Baylor University Press. This coming November the new Introduction to the Septuagint, edited by Siegfried Kreuzer, will become available to students and professors alike. Dr. Kreuzer is Professor of Old Testament at Protestant University Wuppertal/Bethel in Wuppertal, Germany, where the bi-annual Septuaginta Tagungen are held (e.g., here).

This is a volume you will certainly want on your shelf, but there are a few things to know about it before you take the plunge.

The first thing is that this volume will have quite a bit of overlap with the excellent T&T Clark Companion to the Septuagint edited by my Doktorvater Jim Aitken (here). I discuss this overlap in more detail below.

The second thing you need to know is that this volume is not exactly new. It is actually an English translation of a volume originally published four years ago in German by Gütersloher Verlagshaus in Gütersloh, Germany.

Now, neither of those things are deal-breakers by any means. But they are important. So I want to look more at each one.

A Translation from LXX.H Volume 1

In its German version, this volume is part of the ongoing Septuaginta Handbuch series — known as LXX.H — being produced by the Forschungsprojekte zur Septuaginta in Deutschland. This project was also responsible for producing Septuaginta Deutsch (LXX.D). The Handbuch series currently has two volumes available out of a planned seven, with two others slated to emerge this year focused on historical context and theology for Septuagint research (here).

Baylor Press was kind enough to allow me to get my hands on a pre-publication version of the English book, so we can have a peek at the table of contents for the German and English versions to see that they are, in fact, totally identical:

Here is the first portion of the German version:

And the English Version:

You can see the full German Table of Contents here.

Now, me pointing out the fact that this volume isn’t “new” is not a criticism. Just the opposite. I think it’s fantastic that this has been translated into English and printed by a more familiar and accessible publishing house for the English speaking market. It will be used by a much wider audience for that reason alone, not to mention the fact that it will be about half the price!

Moreover, I happen to know that the chapter on Judges is excellent, since I consulted the German version extensively for my doctoral work. I have not had time yet to delve into this volume in enough depth to offer a detailed opinion on other chapters. But given the list of contributors involved in this volume, you can expect the same high quality throughout the book.

Comparison with the T&T Clark Companion

So how does this book stack up to the T&T Clark Companion to the Septuagint? Well, once again I have not read this book in full yet of course, but I can offer a few preliminary observations.

1. Both Aitken and Kreuzer offer in-depth treatment of each book in the Septuagint corpus. Overall, Kreuzer looks slightly more extensive, mostly in the amount of attention given to reception history. Here’s how the chapter structures stack up:

2. Kreuzer’s volume gives full treatment of books that are grouped together in Aitken, for example:

3. Kreuzer’s volume includes several chapters on broader topics, such as:

As for point (2) above, the fact that Kreuzer’s volume has individual chapters for books does not necessarily mean those books are discussed in more detail. For example, Aitken’s “Additions to Daniel” chapter is thirteen pages, while both Kreuzer’s “Susanna” and “Bel & the Dragon” chapters add up to only eleven. But in the case of the Twelve Prophets the situation is very different: Aitken’s “Twelve Prophets” chapter is only eighteen pages, while all of Kreuzer’s chapters on the Twelve add up to over ninety pages. So that is a major difference indeed if you are doing research in the Twelve.

If you are involved in detailed research on the Septuagint, you can’t afford to ignore this volume (especially if you didn’t already know it existed in German before this translation.) But if you do not already have Aitken’s T&T Clark Companion to the Septuagint, I wouldn’t say that the appearance of Kreuzer’s volume in English necessarily makes Aitken’s unnecessary. Far from it. Septuagint scholarship has only recently begun producing this kind of synthetic, overview-style secondary literature, so those coming to (or already working in) the field cannot afford to overlook anything this useful. Besides, in any discipline it can be extremely helpful to get “the same” overview from more than one source for a new perspective on the issues.

I applaud this effort and look forward to evaluating the translation work itself as well as the actual contents more closely, which I will hopefully be able to do in the months to come.

One last question to shout at the clouds: Are plans in place to translate the other LXX.H volumes as well? Volume 3 is not entirely in German, but much is, and the forthcoming volumes likely will be as well. Inquiring minds want to know…