It’s been pretty quiet on this blog for almost two months now. Part of the reason for that is the fact that I am now entering what is hopefully my last six months of dissertation writing. Things are getting serious so it’s taking more of my time and focus.

I’ll also say that I have not one, but two pretty big announcements to make, one Septuagint-related and one personal. I can’t really say anything more at this point. But suffice it to say that these two items have demanded a lot of my time and attention over the last two months as well. More coming soon. END_OF_DOCUMENT_TOKEN_TO_BE_REPLACED

In two previous posts (here and here) I shared some interesting archival materials I have come across in the Cambridge University library manuscripts room.* I’ve been searching for correspondence related to some early 20th century efforts made at a lexicon of the Septuagint, so far to no avail.

Yet I’ve found other interesting material. Today I post for your enjoyment a letter written by the estimable Henry Redpath (1848–1908), graduate of the University of Oxford (D.Litt. 1901), curate and later vicar near Oxford, and Grinfield lecturer on the Septuagint (1901-1905), inter alia.

Redpath is still well-known because of his efforts to bring the concordance work of Edwin Hatch to completion, now known as simply Hatch-Redpath (second edition by Baker), but originally A Concordance to the Septuagint and other Greek Translations of the Old Testament (3 vols.; Oxford, 1892-1906). It is that work that is the topic of the letter below.

As in previous posts, I have transcribed each page, with the symbol | indicating a line break. The images have been enhanced for clarity, and can be clicked on and enlarged. If you think I’ve gotten something wrong – or can decipher some of what I have left as [?] lacunae – please say so in the comments below.

I have for some time past been | occupying myself with compiling | a Concordance to the Proper Names | and other transliterated Hebrew | words to be found in the Septuagint. | I should now like to find a publisher | for the same, and of course that | is not a very easy matter. It has | occurred to me whether the | Cambridge University Press | would undertake it. 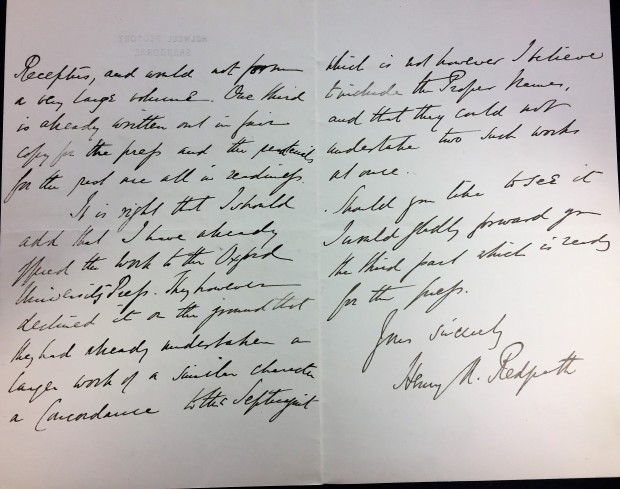 [p. 2] Receptus, and would not form | a very large volume. One third | is already written out in fair | copy for the press and the materials | for the rest are all in readiness [?]. |

It is right that I should | add that I have already | offered the work to the Oxford | University Press. They however | declined it on the grounds that | they had already undertaken a | larger work of a similar character | a Concordance to the Septuagint |

[p. 3] which is not however I believe | to include the Proper Names, | and that they could not | undertake two such works | at once.

Should you like to see it | I would gladly forward you | the third part which is ready | for the press.

Yours sincerely,
Henry A. Redpath

In their Introductory Essay to the 1998 second edition of Hatch-Redpath, Robert Kraft and Emanuel Tov discuss the development of the Concordance in some detail. It’s worth a read. Suffice it to say that, from what I can tell, the material that Redpath pitched here to CUP ended up in Appendix 1 of Hatch-Redpath, which was revised at certain points. That appendix contains a list of LXX/OG proper names, with a smattering of other transliterated common nouns. As Kraft/Tov point out, however (p. 14), some other common noun transliterations appear also or only in the main concordance itself.

* I have not looked too diligently into whether I am permitted to share these images publically. If you are someone in charge of such things and wish me to take them down, do let me know at williamross27@gmail.com.

In my last post I mentioned that some of my research has taken me into the exploration of some late-19th century letter correspondence of the iconic Septuagint scholar Henry B. Swete.* The University of Cambridge Library has a special archive search system that allows you to explore the (quite extensive) collection for perusal in the manuscripts room (pictured right). This is at once a terrific resource and a real temptation, since there is an ocean of interesting things waiting to be dusted off and read.

I’ve been giving in to the temptation somewhat recently as I’ve been reading through most of Swete’s mail and wandering off into interesting subjects not directly relevant to what I’m actually looking for. Oh well.

In the first post, I provided photographs and a transcription of a letter dated to 1883 from Edward Atkinson, then master of Clare and (I assume) member of the Syndics of Cambridge University Press. Atkinson writes to ask Swete if he is interested in taking over the editorship of a “smaller” edition of the Septuagint. As you can read below, Swete accepted – much to the benefit of the next century of scholarship – and went on to produce a critical text based on the main codices.

Again, I have transcribed each page, with the symbol | indicating a line break. The images have been enhanced for clarity, and can be clicked on and enlarged. I’ve also taken the liberty to include relevant links. If you think I’ve gotten something wrong – or can decipher some of what I have left as [?] lacunae – please say so in the comments below! 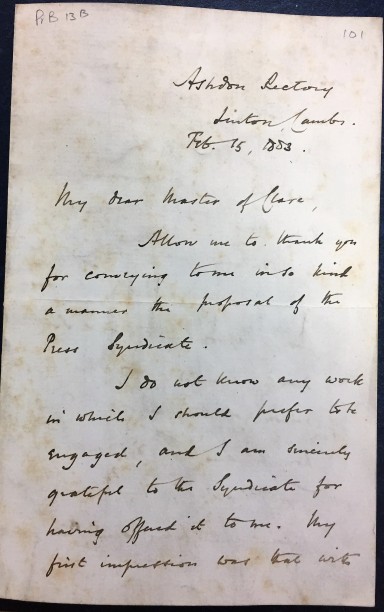 My dear Master of Clare,

Allow me to thank you | for conveying to me in so kind | a manner the proposal of the | Press Syndicate.

I do not know any work | in which I should prefer to be | engaged, and I am sincerely | grateful to the Syndicate for | having offered it to me. My | first impression was that with

so slight a knowledge \of the subject/, I ought | not to venture upon such a field; | but this feeling has been | modified by the prospect of | there being no lack of conditions[?] | to undertake particular portions | of the work, and by the pro-|posed appointment of a Subsyn-|dicate charged with the super-|vision of the whole. There is | however another difficulty which | must be stated. My time is at | present very fully occupied; and 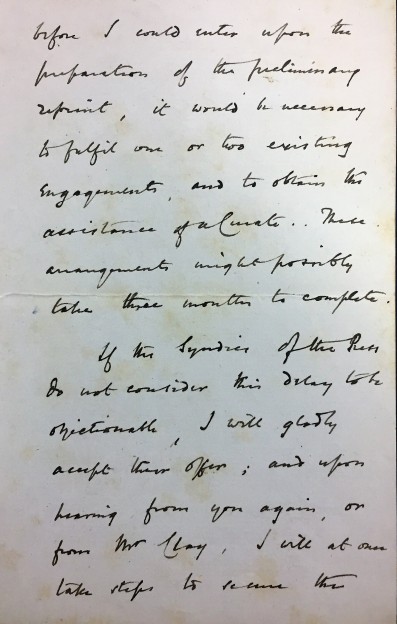 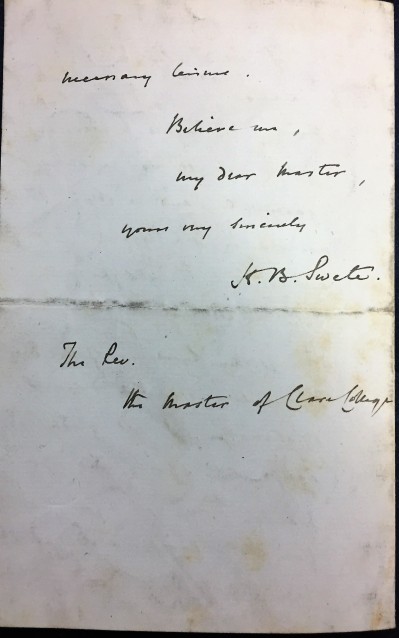 before I could enter upon the | preparation of the preliminary | imprint, it would be necessary | to fulfil one or two existing | engagements, and to obtain the | assistance of a Curate. These | arrangements might possibly | take three months to complete.

If the Syndics of the Press | do not consider this delay to be | objectionable, I will gladly | accept their offer; and upon | hearing from you again, or | from Mr [C. J.] Clay, I will at once | take steps to secure the

Believe me,
my dear Master,
Yours very sincerely,

The Master of Clare College

It is hard not to be amused at Swete’s humility, but there is a lesson there for all of us.

There is a boatload of Swete’s correspondence that I’m sorting through, and I will likely post more of it here in the future. Next, however I’ll be posting a letter written by a different Henry, namely Henry A. Redpath.

* I will repeat that I have not looked too diligently into whether I am permitted to share these images publically. If you are someone in charge of such things and wish me to take them down, do let me know at williamross27@gmail.com.