Just a short but exciting bit of news to share today. I’m very pleased to report that my new book Postclassical Greek and Septuagint Lexicography has now been published with SBL Press in the Septuagint and Cognate Studies series. This book is the “official” — and only lightly revised — version of my doctoral thesis, which I completed in 2018 at the University of Cambridge under the supervision of James (Jim) K. Aitken (see below). END_OF_DOCUMENT_TOKEN_TO_BE_REPLACED

I was glad to finally receive proofs last week of a piece I wrote nearly three years ago. Over the summer of 2013 I conducted research for a paper that I presented in Munich at the triennial IOSOT congress, in the IOSCS Section.

This work was aimed at preparing myself for the sort of research I am currently involved in with my dissertation, namely Septuagint lexicography and the textual history of the book of Judges. You can read a bit about my preparations and reflections on the congress if you want.

The paper, which is entitled “Lexical Possibilities in Septuagint Research: Revision and Expansion,” picks up the lexicographical torch from John A. L. Lee’s dissertation by reinvestigating Koine documentary evidence contemporary with the translation of the Septuagint (~3rd c. BCE – 1st c. CE) for occurrances of ὁράω and βλέπω. Lee found a semantic shift and replacement between the former and latter in his own work, and I basically set out to find new instances of the words in the evidence since Lee to see if his conclusions hold up. Spoiler: they do.

This paper reviews the findings of John A. L. Lee regarding historical linguistic investigation of Koine Greek documentary evidence in his published dissertation. With the passage of over three decades since Lee’s work, much more papyrological and inscriptional evidence has surfaced. Moreover, a significant amount of the data is now digitized and searchable. Therefore, this paper begins to pursue the course set out by Lee himself in the introduction to the published version of his dissertation where he suggests it could surely “benefit from revision or expansion” in light of new data. To do so, here the digital databases of documentary evidence are investigated for occurrences of ὁράω and βλέπω that are additional to those found by Lee. After assessing the use of the two words in new evidence, a “revision” of Lee’s conclusions is offered. Even in light of new data, Lee’s conclusions prove remarkably accurate, suggesting the potential of his methodology for further application and even “expansion.” Accordingly, this paper also discusses the difficulties inherent in documentary evidence research and possible ways forward, with particular attention to the double text of LXX-Judges.

If you’re really interested, you can read the paper on Academia.edu. Seeing as I just got proofs this week, it will hopefully be published before the SBL conference in November. It will appear in XV Congress of the International Organization for Septuagint and Cognate Studies (IOSCS), Munich, 2013. Edited by Wolfgang Kraus, Martin Meiser, and Michaël van der Meer. SBLSCS 64. Atlanta, Ga., SBL Press, 2016. 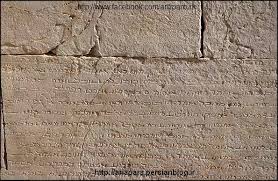