Back in September of last year I posted about the Soisalon-Soininen Symposium on the Septuagint, which just took place last week from 1-4 June 2017. It was an excellent event with a very good lineup of invited speakers (on which see this post) that was only improved by wonderful Finnish hospitality. Having now returned and recovered from the trip, I thought I would offer some reflections.

One of my favorite aspects of this event was getting to learn more about the so-called “Finnish School” of Septuagint scholarship, and to meet those who are part of it. As I’ve written about previously, Ilmari Soisalon-Soininen (who evidently went by the nickname “Soiski”) was Professor of the Faculty of Theology at the University of Helsinki from 1964–84. From all accounts, he was deeply interested in the textual history and ancient translation of the Jewish scriptures. His doctoral dissertation focused on the same book as my own – Judges – and closely examined the various patterns within the syntax and vocabulary of the textual traditions of the book in order to account for its origins (I. Soisalon–Soininen, Die Textformen der Septuaginta-Ubersetzung des Richterbuch, AASF 72.1 [Helsinki: Suomalainen Tiedeakatemia, 1951]). 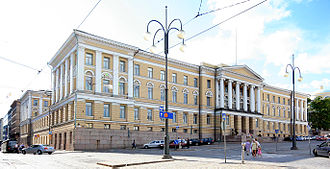 In addition to his many publications, a handful of which are now available in English thanks to Theo van der Louw, Soisalon-Soininen gave the discipline of Septuagint studies several of its now senior scholars, who in turn have trained their own students. These include (but are not limited to) Raija Sollamo, Anneli Aejmelaeus, Seppo Sipilä, Anssi Voitila, and many current students such as Christian Seppänen, Miika Tucker, Ville Mäkipelto, and Paavo Hutari. Following in the tradition of their Doktorvater (or Großdoktorvater), the Finnish scholars do a remarkable job gathering huge swaths of data from the Septuagint corpus, often in pursuit of creating a syntax-based profile of a given translator.

There were a number of themes that seemed to arise through the course of this four-day symposium. One was the degree to which the translators employed “natural” or “conventional” Greek rather than some other kind of language (sometimes referred to as “translationese” or something similar). It seemed to me that, while all acknowledged that the Septuagint contains a great deal of conventional Koine, there seemed to be something of an impasse regarding whether or not that was the exception or the rule. Several discussions took place about the “competency” of the Septuagint translators in Greek, and some debate surfaced over whether this was to be expected or should be considered surprising in some way.

Another frequent topic of conversation – again, related to those above – concerned what exactly we mean when we say “Hebraism.” This term appears very frequently in the literature and is about as old as the discipline itself, yet it is not often defined in any principled way. Usually, it seems like the primary criteria for labeling a linguistic feature a “Hebraism” is the scholar’s subjective judgment that it “feels” un-Greek somehow. Of course, there is a host of pitfalls here. John Lee’s discussion of Greek idiom was quite helpful because he faced the problem of Hebraisms head-on, arguing that only one kind of phenomenon should qualify: phrases that both (1) precisely replicate the syntax of the Hebrew source text and (2) cannot be found in contemporary non-translated Koine. This may sound obvious, but what is useful about it is how it excludes cases where criterion (1) is met but not (2). In other words, where a phrase precisely replicates Hebrew syntax yet it can be found in contemporary non-translated Koine (i.e., it is a conventional Greek phrase). These cases, Lee argues, should not be considered Hebraisms, although the selection of the conventional Greek phrase may have been motivated by its felicitous match with the underlying Hebrew.

If you’d like you can scroll through some pictures I took throughout the weekend. Since I am thinking through many of ideas generated by the Finnish School, I will be posting an interview with Anneli Aejmelaeus in the near future, so look for that.

The harbor in downtown Helsinki (it’s the Baltic Sea, by the way)

My first dish in Finland: reindeer tartar. No, I’m not kidding. Yes, it was yummy.

Finnish is extremely interesting and extremely agglutinative. Here’s the word for “coal chute.”

Got to spend a few hours with John Lee talking about Greek phonology, inter alia.

The fantastic (and Lutheran) Helsinki Cathedral

A forthcoming volume to be on the lookout for

The grave of Ilmari Soisalon-Soininen, which the delegates were able to visit to pay respects on the 100th anniversary of his birth.