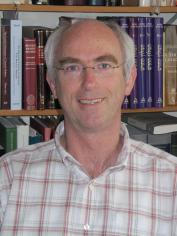 Jan is a very prolific scholar to say the least. If you are interested in Old Testament textual studies, you will have almost certainly run into his work. If you are a graduate student interested in Old Testament and/or Septuagint studies, you should strongly consider getting in touch with Jan about supervising. Aside from being a top scholar in his field, he is very intentional about sharing his work freely. His Academia.edu webpage, where you can even access a full PDF of his Verbal System of Biblical Hebrew and Septuagint Vocabulary volumes, is a fine example of open-access scholarship. Although I was not able to make it to his inaugural lecture, I was very glad to see that a colleague, Marieke Dhont, did attend and recorded it. After obtaining Jan’s permission to publicize it here on the blog, I thought I would present a brief preview of the talk here, and also provide the link.

The sum and substance of Joosten’s argument is that, although Hebrew did not start out as a “holy tongue,” it became one over time and may still rightly be considered as such.

The importance of Hebrew to Judaism and Christianity keeps the study of Hebrew a vibrant and ongoing discipline in universities the world over. In religious tradition, it is the language of God himself, and of all humanity prior to the confusion of Babel. Few interpreters throughout the middle ages contested this notion – on exception being Gregory of Nyssa (4th c.), who considered it unnecessary literalism. Even through the 18th c. many biblical scholars considered Hebrew to be humanity’s original language.

Certainly in today’s world of biblical scholarship things have changed significantly. Views of Hebrew have changed for many reasons. First, Hebrew is again, now for nearly seventy years, a national and living language in the modern state of Israel. It is now a language of the street once more. This makes considering it a “holy” language somewhat difficult. Secondly, previous Regius Professor of Hebrew S. R. Driver (19th c.), major contributor to the development of the historical critical approach to the OT, showed how Hebrew had changed over time. It was not some ineffable heavenly dialect, but one subject to normal linguistic change in space and time. Later, Regius Professor of Hebrew James Barr (late 20th c.) approached Hebrew from a philological perspective, showing how obscure passages could be illuminated by means of Ancient Near Eastern cognate languages. He also destroyed the notion that the “thought” of the OT was somehow inherently bound up with Hebrew per se. Thus once more, Hebrew is not uniquely equipped to express divine truths.

Thus, over the past half-millennium, study of ancient Hebrew has moved away from the idea that Hebrew is “holy.” Nevertheless, says Joosten, Hebrew may yet be reasonably considered a holy tongue that, though originally an ordinary human language, is became fit for religious purposes, and “ever so slightly unfit for everything else” (14:40-15:04 in audio recording).

The Paper in Full

I won’t summarize the entire talk, because then you wouldn’t listen to it yourself. Hopefully the taster above is just enough to make you spend the time doing the rest of the work yourself. But why listen to it when you can get the entire thing in PDF Form? If you can’t think of a reason, then you can read Jan’s lecture in full here.