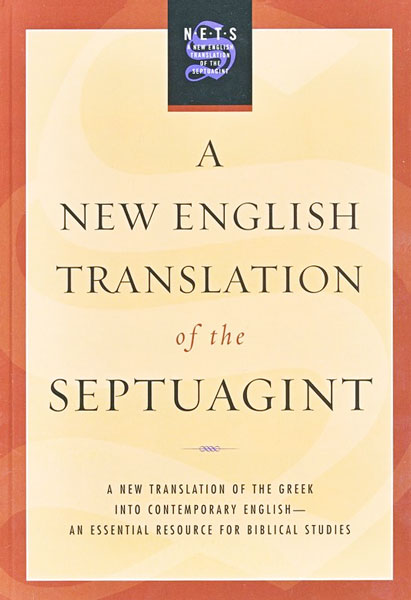 In a previous post I announced a new ‘series’ in which I will outline the various principles and procedures involved in the current modern language translations of the Septuagint. Apologies that it has taken me so much time to get back around to working on this series. In the time since I wrote the initial post, we had our second child and moved from Philadelphia to Cambridge, where I have just begun doctoral work. This left me short on time and without any of my books!

But now, back to business.

I mentioned four modern translation projects of this sort – some finished, some still in the works. The first and, for many, most relevant of these is the most recent English translation. While there are older versions (namely Thomson [here] and Brenton [also here]), NETS is your best bet, generally speaking, for a “good” English rendering. As I mentioned, NETS is also accessible freely online (copyright), although owning a hard copy is well worth the cost since you’ll be referring to it so often. You can also purchase it for Accordance as well as Olive Tree.

Of course, just what constitutes a “good” translation is exactly the topic of this series. With that, I will dive into the approach of the scholars who produced NETS.

The New English Translation of the Septuagint

Each of the modern language translations of the LXX operate on the basis of assumptions about the nature of the LXX itself. What makes NETS unique among them is its understanding of the LXX as a subservient text to the Hebrew scriptures that came before it. Indeed, proponents of the NETS approach understand the Greek and Hebrew scriptures to have coexisted with equal importance, so to speak, after the Greek version was produced. This is not merely to say that both Hebrew and Greek texts existed, but that the Hebrew continued to serve as a religious text, rather than being supplanted by a new translation. The reason, in the perspective of the NETS group, is that the LXX was intended to serve as a pedagogical tool for Jewish students of the Hebrew text, which was always read alongside the Greek so that the two texts were best understood in conversation with one another.

The basic framework that NETS uses is called the Interlinear Paradigm. The genius behind this model is Albert Pietersma, who presents a conceptual school setting in which Greek and Hebrew texts were read in interlinear fashion. Pietersma states that the dependent status of the Greek version entails that “for the vast majority of Septuagint books this linguistic relationship can best be conceptualized as a Greek inter-linear translation of a Hebrew original within a Hebrew-Greek diglot” (“To the Reader of NETS,” xiv). “Conceptualized” is a key word, as he quickly clarifies that the term “interlinear” or “diglot” is merely a visual aid of sorts to help conceptualize the linguistic relationship. He is not proposing (or denying) there were actual interlinear Greek/Hebrew texts circulating among Jewish students.

Not how NETS envisions the LXX

In short, NETS take the approach, unique among its peers, that the intention of the LXX was to bring its reader to the Hebrew text, rather than bringing the Hebrew text to the reader. In other words, the point of translating the Hebrew scriptures was not to help Greek-speaking Jews comprehend a text that had become arcane and difficult to them in the Hellenistic era by producing a comprehensible translation (much like, say, the NIV is intended to help the ‘average Joe’ read the bible with ease). Rather, it was to help Greek-speaking Jews retain religious (and scholarly?) access to ‘the original,’ the Hebrew scriptures themselves (much like, well, an interlinear Greek New Testament). That was the intention of the LXX as produced.

Pietersma suggests this model has explanatory power. Most significantly, it accounts for the characteristic of “literalism” in most LXX books’ translation – that is, in many or even most cases (depending on the book) the Greek words match roughly one-to-one with the Hebrew words (MT). This is what is called the “constitutive character” of the LXX, and one often sees the word “isomorphism” or “isomorphic” in the relevant literature to describe this translational pattern. Importantly, interlinearity is meant to account for the many places where the Greek phrasing of the LXX is difficult to understand as Greek, or without reference to the Hebrew. If the Greek is awkward, so the logic goes, this is best explained by the assumption that the translator was attempting to mimic the Hebrew text as closely as possible, without regard (or with little regard) to the style or literary acceptability of his text in the Greek cultural environment.

To bring this whistle-stop tour full circle, this methodological approach has practical implications upon the English version. NETS scholars will go on to say that the Jewish community eventually read the LXX independently, as a “received” text, despite its difficulty to understand. In similar fashion, the approach taken by the NETS team was to clarify the Greek text by referring to the Hebrew text, rather than attempting to puzzle it out as a (hypothetically) intelligible text qua Greek text when they themselves were translating the LXX.

Some of the NETS team

So hopefully you can see how one’s understanding – or assumption – of what the LXX is, how it was meant originally to function as a text, has a profound influence upon how a modern translation is produced. It is necessary to have some assumption like this, although as we’ll see in future posts, there are at least three other possible assumptions for Septuagint origins, and these are distinct enough from that of NETS to amount to a fairly different product.

If you want to dive in further, I recommend listening to this excellent interview by T. Michael Law, which features top Interlinear Paradigm proponent Benjamin G. Wright explaining the methodology in detail (my apologies for the gaudy musical introduction).

Next time I will deal with La Bible D’Alexandrie, the ongoing French translation project, so stay tuned!

A. Pietersma, “To the Reader of NETS,” in A New English Translation of the Septuagint (pdf available here).