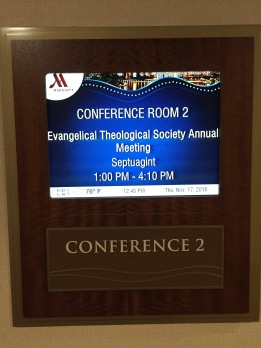 If you’re involved in biblical studies then you are aware that thousands of scholars are still catching up on sleep and icing knees due to all the activity of last week’s annual conferences in San Antonio, TX. People from various corners of the earth and of diverse theological stripes gathered for up to seven days straight to discuss their work, catch up with colleagues, buy books, and eat their year’s worth of tacos on the Riverwalk.

I have posted previously about the Septuagint Studies session held at ETS in 2015, which was subsequently granted consultation status for 2016-2018. We had our first session this year (see here), which I had the unexpected pleasure of moderating. Considering how well it went, I wanted to take the time to highlight it one last time.

An Overview of the Presentations

The first paper was by Dr. Stanley Porter of McMaster Divinity College in Ontario (pictured on the left below; I’m at right).

Although you are likely aware of Stan’s voluminous output as a scholar, you may not know that he is also involved in Septuagint scholarship as well. Stan is the general editor of the Brill Septuagint Commentary Series (see here). His paper at the ETS consultation, “Why a Greek-text Oriented Commentary Series is Necessary,” essentially overviewed the rationale and methodology for this series, which is now past a dozen completed volumes (as compared to the SBL Septuagint Commentary Series, which has thus far had no volumes emerge). Personally I think it is a valuable project – although not without its serious challenges – that will meaningfully contribute to the debate over the interpretive “locus” of the Septuagint (Hebrew source text or Greek target text?) that runs right through the discipline, from lexicography to commentary.

Next was Dr. Karen Jobes’s presentation,

“‘It Is Written’ The Septuagint and Evangelical Doctrine of Scripture.” Perhaps unsurprisingly for the ETS crowd, this paper was the best attended of all four. Jobes essentially wrestled with those texts in the New Testament where an Old Testament quotation is given, often with the explicit citation formula “it is written,” only to find that the text cited differs somehow – sometimes quite distinctly – with what we find in the Masoretic Text of the Hebrew Bible. Of course, most acknowledge in theory (if sometimes not in reflex) that the MT is not “the” text of the OT that we mean when we say “original text” (however defined). But even so, sometimes such New Testament citations differ not only from the MT, but any other Hebrew witnesses, as well as the extant witnesses to the Septuagint. How are we to reconcile such a situation with an evangelical doctrine of inerrancy? You’ll have to wait for Karen’s paper to be published to find out.

Third, Dr. Peter Williams of Tyndale House, Cambridge, gave a presentation entitled “On the Invention and Problem of the Term ‘Septuagint.'” This paper went beyond the usual (but highly relevant and necessary) distinction between the so-called “Septuagint proper,” by which we mean the Greek Pentateuch, and the rest of the Old Testament translations in Greek. Here, Pete drew attention to the fact that “the Septuagint” is in fact not really a coherent entity, textually speaking, and pointed to the pitfalls associated with that category mistake. The Septuagint is an eclectic collection of translated texts made and revised by many people, in many places, times, and over the course of several centuries. There is no “it.” Pete provided a fascinating historical survey of the ways in which the term “Septuagint” and all its various forms (including Septuaginta, LXX., etc.), and the ways that such terms tie into and contribute to the complexity.

Finally, Jen Jones of McMaster Divinity College also presented a paper entitled “Theme Variation in Zechariah 2:10-17 (6-13): A Comparative Analysis of Two Textual Traditions.” This paper dealt with the possible presence of semantic shifts occurring in translation from Hebrew to Greek, which result in differing nuances in the target text. Jen used a text-linguistic approach to model how, intentional or not, the changes of the Greek translation seems more focused upon movement towards Jerusalem, communication only from God, and an increased focus upon safety, all possibly indicating the translation’s social context.

It’s easy to come to a session when there are great presenters lined up, and that is precisely what happened. We had an average of about 40 attendees, which maxed out the seating, but packed in over 60 at our busiest point!

Thanks to all who participated, whether as a steering committee member, presenter, or attendee. It was a great session. Please stay tuned for information on the 2017 session some time in late March. If you are interested in being included on our ETS Septuagint Studies mailing list, please send me an email or leave a comment with your email address and I will add you.

The Steering Committee and 2016 Panel (and some guests!) – Photo cred Mike Aubrey