There is a sign dangling in my neighbor’s yard by the flower beds that reads “Life Begins in the Garden.” 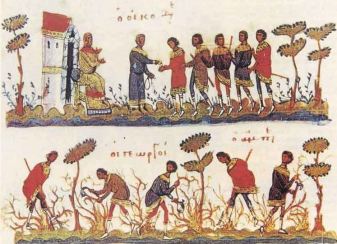 When I saw the sign the other day, I thought “How true.” As I’ve thought about it more since then, I have realized just how remarkably profound and thoroughly Christian the statement is. Naturally, Chesterton puts it best:

“On the third day the friends of Christ coming at daybreak to the place found the grave empty and the stone rolled away. In varying ways they realised the new wonder; but even they hardly realised that the world had died in the night. What they were looking at was the first day of a new creation, with a new heaven and a new earth; and in a semblance of the gardener God walked again in the garden, in the cool not of the evening but the dawn” (The Everlasting Man [Dover, 2007], 207).

Life began in Eden at creation, and began anew at the garden scene of the resurrection (cf. Gen 2:8; John 20:15). As Fred Putnam points out, one of the commonest metaphors used of God in Scripture is that he is a farmer (e.g. Ps 80:8-9). Conversely, people are plants (e.g. Ps 1:3). When the True Vine revives after the winter of divine abnegation, he offers life to those grafted into him by the Fatherly Vine-dresser.