If you are a regular in the world of biblical studies conferences, then you are probably not prepared to start thinking about anything other than the ETS, IBR, and/or SBL events in Denver coming up (next month, in case you forgot).

And yet, think you must, especially if you are part of Old Testament scholarship, since the IOSOT Congress is coming up next summer. It is to be held at the University of Aberdeen from 4-9 August 2019 in the newly renovated and refurbished Music Hall. There is a dedicated website here.

Although registration is not quite up and running, the call for papers is now open.

What is the IOSOT Congress?

The International Organization for the Study of the Old Testament (IOSOT – sometimes pronounced “EYE-oh-sot” or “YO-sot”) is the central and most important organisation of Old Testament scholars in the world. There is no membership involved. Rather, IOSOT consists of its “congress,” which is held in a different location every three years. Most recently it was held in Stellenbosch, South Africa, and prior to that in Munich, Germany (2013). 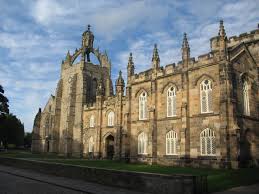 Essentially the congress consists of a presidential address, main papers that are presented by a number of invited scholars each morning, and short papers in the afternoons. It is the short papers that are open to those who would like to submit an abstract for consideration. The short papers and related workshops are to be held in the beautiful King’s College (see right).

Obviously the most important thing about IOSOT is the fact that the IOSCS meets. I had the pleasure of participating in this event back in 2013 and found it especially enjoyable, since many European scholars in the discipline who do not make the trek to SBL will join in this event. That makes it a unique opportunity to have your ideas exposed to and critiqued by a wider range of scholars whose opinion should matter to you.

Another fun part of IOSCS at IOSOT is the fact that there is a congress volume published afterwards (sometimes looong afterwards). So presenting gives you an opportunity to have your work made available in print, usually published by SBL Press. The 2013 congress volume only came out in 2016 (see here and here).

So consider whether you are able to make it to Scotland next August and participate in what will certainly be another excellent event.