Not long ago, I posted something about the long-awaited arrival of volume one in the Historical and Theological Lexicon of the Septuagint (here). It is a major achievement that will make a serious contribution to the biblical studies academy. But it is only the first installment of many!

I mentioned in that post that I was looking forward to hearing from Bons about his labors to bring this project to fruition. I’m grateful for his willingness to tell us more about it here.

Can you tell us about the history of the HTLS? How and when did this project come about? 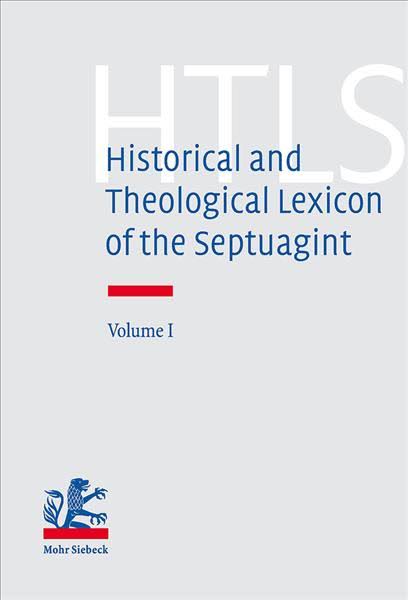 The idea to write a historical-theological dictionary of the Septuagint was born about fifteen years ago. In the course of my participation in the translation projects La Bible d’Alexandrie and Septuaginta Deutsch, I realized the degree to which the Septuagint employs or creates a specialized vocabulary: terms concerning the history of Israel (e.g., “Exodus”, Babylonian exile, diaspora), the vocabulary of legal texts (e.g., so-called “redemption”), terminology of ethics (namely virtues and vices), epithets of God (e.g., “creator”, “refuge”), etc. The idea that the Septuagint is an interlinear translation of its Hebrew source has never convinced me. On the contrary, the use of a very specific voca­bu­lary shows the extent to which the Septuagint is much more than a literal translation, but is rather an inter­pretation shaped by many factors.

Over one hundred years ago, Adolf Deissmann presented groundbreaking studies on this subject. In recent decades, Italian scholars such as Orsolina Montevecchi and Anna Passoni Dell’Acqua (Milan) have shown in numerous investigations that characteristic Septuagint terms have a specific background in the language used in the Ptolemaic era. But that is not all. In-depth analysis of Septuagint vocabulary shows that still other influences shape the first translation of the Bible: Greek literature and mytho­logy, society and politics of Ptolemaic Egypt, contemporary theological debates, to mention only the most important ones.

It therefore seemed necessary to me to systematically examine the vocabulary of the Septuagint against the background of Greek literature, the papyri, and the inscriptions, but also in comparison with the other Jewish Hellenistic literature including Philo and Josephus. Finally, the question of the extent to which specific Septuagint vocabulary has an influence on the New Testament and early Christian literature seemed important to me.

Some “initial soundings” devoted to specific words (e.g., κτίζω/κτίστης, βοηθός), as well as conversa­tions with colleagues, led me to decide to extend this methodology to numerous other terms and to strive for the publication of a lexicon of Septuagint terminology.

How did you make this major project possible? What about practical matters like funding, collaborators and publisher?

In 2007 at the IOSOT congress in Ljubljana, Slovenia, I met Dr. Henning Ziebritzki from the Mohr Siebeck publishing house, Tübingen (Germany), who was very supportive of the idea and helped to put it into practice with many useful suggestions. A meeting with the members of the Advisory Board (Emanuela Prinzivalli, Anna Passoni Dell’Acqua, James Aitken, Erik Eynikel, Christoph Kugelmeier, Tobias Nicklas, Michael Segal) was very important in order to better define the interdisciplinary approach. Financial support from various European research institutions has helped me to recruit staff, without whose steadfast dedication the work could not have been completed. Some of them were involved in the project from the beginning (e.g., Ralph Brucker, Patrick Pouchelle, Daniela Scialabba), writing articles or checking those written by other authors, while others joined in over time (Stefanie Peintner, Romina Vergari, Antonella Bellan­tuono, Laura Bigoni, Anna Mambelli and Giulia Leonardi). Last but not least, the bulk of articles has been written by around 150 authors on five continents, with whom we were in more or less close contact. As far as the technical side is concerned, I could always rely on the extremely qualified and motivated staff of the Mohr Siebeck publishing house.

There are two other recent Septuagint lexicons in publication, known as GELS and LEH. How does the HTLS compare and contrast with those?

The HTLS is far from being exhaustive. GELS and LEH provide English translations of Septuagint words as attested in the critical editions, including rare words as well as very widespread terms that the LXX has in common with everyday Greek language. The HTLS, however, will deal with around 600 words or word groups.

As a rule, the HTLS articles address the following questions:

Therefore, an entry has at maximum six sections:

Some entries are short because a word might not be attested in Greek literature or in papyri. Others are quite long because we want to follow the semantic development of a word through the different epochs and literatures.

Given that the HTLS is not exhaustive in its lexical coverage but only covers “important” words, how are lexemes chosen for inclusion?

Needless to say, clear-cut criteria do not exist. However, the following criteria were used to make our selections:

What have been some of the biggest challenges in producing Volume 1?

The biggest challenges were on two levels in particular. First of all, it proved difficult to find long-term financing. Government institutions that support research prefer short-term projects. It was therefore always necessary to convince potential donors of the usefulness of the project. Second, it was only a small team of about ten active people, mainly in Strasbourg, in whose hands the organization of the project lay. This required recruiting other authors to read and — if necessary — correct articles and steady contact with the publishing house and its staff. Of course, most of us did not work full time for the HTLS, but were academic teachers, post-docs, or doctoral students.

At a broad level for biblical scholarship, what would you say are the major benefits of Greek lexical semantics and lexicography in relation to the Septuagint corpus?

The aim of the HTLS is to point out lines of semantic development. We have to reckon with different scenarios. For example, one and the same word might have its typical biblical meaning as well as its “traditional” meaning in the Septuagint books. Both meanings might occur side by side. Moreover, the Septuagint introduces “new” meanings, whereas the “older” meanings reappear in later Jewish and Christian texts. Therefore, it is interesting to find out if later authors like Philo or Josephus replace typical Septuagint vocabulary or if they paraphrase the respective Septuagint expressions. Finally, a very common Greek word is only scarcely attested in the Septuagint, even in the books written in Greek from the beginning. Later Jewish or Christian authors, however, continue using this word. Hence, the question arises of whether and why these words were avoided in the Septuagint.

Perhaps it’s too soon to say, but how many volumes do you expect in the complete series and what is a prospective timeline?

The next step is to publish Volume 2, which includes the letters Delta to Iota. We expect the first about 20 articles by the end of the year. The publication of the volume is planned for 2025. This planning is realistic, as I can now rely on a large number of proven authors. Many other articles have been assigned to authors. Nevertheless I am interested in involving new authors in Volume 2. If anybody is interested please contact me. All in all, the lexicon will include four volumes: Volume 3 will cover the letters Kappa to Omicron and Volume 4 the letters Pi to Omega.

I am very grateful to Eberhard Bons for his time and — even more so — his scholarship. We look forward to seeing more of it in the years to come!