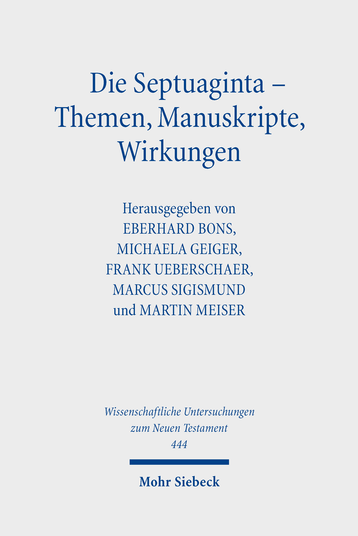 In any case, the new volume, Die Septuaginta – Themen, Manuskripte, Wirkungen, is now in print and contains articles from the 2018 conference, which was a wonderful event. There is a huge number of articles in this book, which comes in just shy of 1,000 pages!

Here are some that I recall listening to or look forward to reading — most of them are by students or colleagues of Eberhard Bons, who is doing lots of great work in Greek lexical studies for the HTLS:

I’m pleased to have my own contribution in the volume as well. Interestingly, my article is positioned almost precisely at the end of this massive tome. But hey, I don’t actually blame anyone. The article is something of a black sheep, entitled “The ‘Scissors and Paste’ Septuagint Concordance in the Bodleian Library (Auct. E 1.2,3).” This was an article that was prompted by a very unlikely event: Reading the preface to the revised edition of Hatch and Redpath’s Concordance.*

That set me on a rather surprisingly interesting path of inquiry. The preface discusses numerous earlier concordances, one of which seemed to have a constellation of question marks around it. Here’s what I read (p. xii): 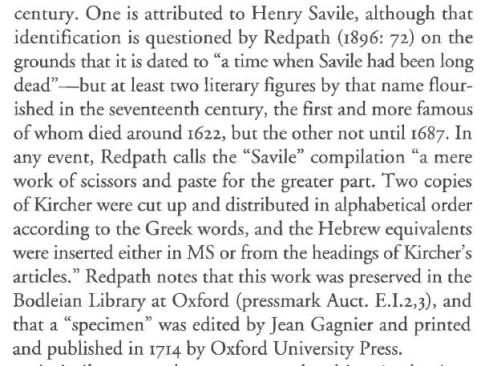 A few things caught my attention here. One was Redpath’s comment that this work was one of “scissors and paste.” As it happens, when I got the chance to go see the manuscript myself (which is still held at the Bodleian), I learned that Redpath was speaking quite literally. Here are some images:

The other thing that caught my attention was Redpath’s skepticism that Saville actually produced this cut-and-paste job (and the question of multiple Savilles). Then there is the parallel issue of Jean Gagnier and the “specimen” printed by OUP years later. How did it all fit together? Well, that’s what my article is about and it was great fun to write.

I look forward the next Wuppertal conference and sincerely hope it comes off next summer as planned.