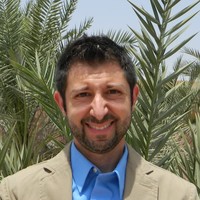 Awabdy was kind enough to answer some questions for me about the project and give us some insights into his research.

Can you tell us a little bit about your academic background? In particular, what brought you to Septuagint studies? 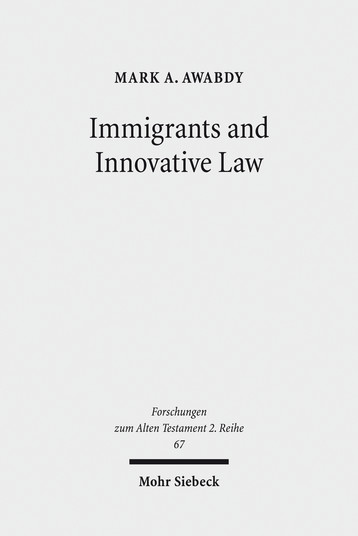 My journey with Koine Greek began in 2003–04 with four semesters under Prof. Gregory Couser at Cedarville University. Through blood, sweat, and tears, a love for the Greek NT was born in my soul. I completed my M.Div. at Grand Rapids Theological Seminary, which only fueled my love for NT Greek, spending a lot of time under Prof. David L. Turner and others (the NT dept. encouraged me at that time with the Zondervan Greek Award). I completed my doctoral studies with an emphasis in Old Testament at Asbury Theological Seminary. Professor Bill T. Arnold was a wonderful supervisor, and he lit my fire for the Pentateuch. My revised dissertation was published by Mohr Siebeck in 2014, entitled, Immigrants and Innovative Law.

It was through a thrilling (no joke) Septuagint Greek course by Prof. Joseph R. Dongell, and then through text-critical work in my dissertation that sparked my fascination with the Septuagint. Since then I have been captivated by the LXX as ancient scribal teacher and textual source. That is, I am interested both in how the LXX gives us some of our earliest interpretations of the Hebrew Scriptures, even in its most formal renderings, and how it aids us in our elusive, but important quest for the primary text of the Hebrew Scriptures.

What do you see as the main advantages or insights that arise from the approach of the SEPT series?

As Hans Ausloos reminded us at the IOSCS/IOSOT congress in Stellenbosch in 2016, every critical edition of the LXX — such as those in the Göttingen volumes or forthcoming volumes (e.g., in the SBL series) — is a non-existent text. The Brill LXX series has the advantage of working with extant manuscripts, in my case, Vaticanus (B). This is also a disadvantage, maybe less so, insofar as we now have more evidence to say that the great codices reflect a series of recensions from the Old Greek. From my perspective, these text critical issues, while important, are not defining: the vast majority of readings in the Leviticus paypyri, the Göttingen LXX and Codices B and A are identical. It would be wrong to give the impression of major differences in content between the base text of the SEPT and SBLSCS series.

The second advantage of the SEPT series is that it focuses on the coherence or incoherence of the syntax, structure and theology of the Greek text. This has the advantage of limiting unsubstantiated speculation about the Greco-Roman influences on the Greek text. For the LXX of Leviticus, nobody in the field will deny that those influences are there, especially in the form of Koine lexical choices (since J. A. L. Lee’s seminal study), but also in the form of cultic and political influences (as Büchner is presently showing). However, often times these studies assume the reader has background knowledge of the political and religious context, but we cannot always know that the reader had such knowledge. If the SBLSCS series has the advantage of bringing new insights from the language and cultures surrounding the text, the SEPT series has the advantage of a more concerted engagement with the empirical data of the contours of the text itself.

Can you describe your approach to writing a commentary that focuses not just on the text, but the codex itself? What kinds of questions about the codex did you keep in mind as you worked? 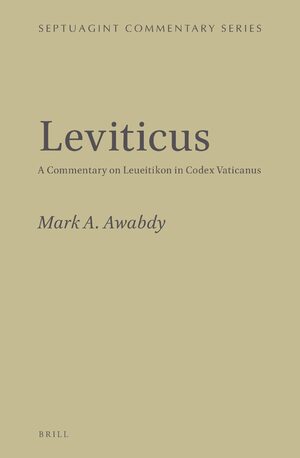 In contrast to other commentaries based on the eclectic texts of Ralphs-Hanhart or the Göttingen volumes, there are certain enjoyable aspects of commenting on a single Greek manuscript.

First, I restrict my analysis to LeuB, but an important part of this, for me, has been to compare and contrast the readings in LeuB with the other mss. This comparative task helps us to see what unites and also distinguishes LeuB as a textual composition. To accomplish this, I began by producing an uncorrected edition of LeuB. Both the editions of Swete and Brooke-McLean are corrected editions, following many of the corrections made by the second hand, who scratched out erroneous readings or unpreferable spellings (which I call Bc). My purpose in generating this uncorrected text was to simulate what LeuB’s original readers would have experienced in trying to make sense of the manuscript.

Second, I focus on the coherence, or incoherence, of discursive units as presented by LeuB. So, I decided to organize my translation and commentary proper by the section divisions formatted by the original scribe or scribes of LeuB, and preserved for us today — thanks to the Vatican Library website, we all have free access to see these paragraph divisions in Codex Vaticanus. Based on the content of contiguous materials, I tried to explain why the scribe outdented his paragraphs where he did. This gives us some of the earliest interpretations of the units of discourse in the Bible, and while we may not always agree the scribe made the best decision, we can learn from these great teachers.

Third, I attempt to read LeuB as a single Greek manuscript that was first received in the fourth century CE (see question 5 below).

Fourth, I make a serious effort to read LeuB as a physical part of Codex Vaticanus, which incorporated into one volume the Old and New Testaments as a Christian document. The Codex format was, to be sure, a provocative move historically, but what I think we miss is that now Leuitikon becomes a chapter in a book that reaches its end in the Messiah, a great high priest who offers himself on the altar as the definitive sin and guilt offering. I include NT quotations and allusions throughout, as well as the readings of the Church Fathers.

In terms of the text of Leueitikon itself, how distinct is B from a critical text like Wevers’? What should we make of that?

Leueitikon, which is the spelling used by B (as opposed to Leuitikon in other mss), shares many readings with Codex Alexandrinus, often followed by Cyril of Alexandria and a collection of miniscules. I would argue we should be careful not to call this a “text type,” but maybe we can speak of a shared LeuBA textual tradition. To formulate the Göttingen critical text of Leviticus, clearly Wevers follows LeuBA as his base text, but many times, as I looked at his choices, I was unpersuaded by the external evidence (mss support), even though I could see his logic on internal, stylistic grounds. In recent years, scholars have been increasingly critical of Wevers’ decisions in his eclectic text (Leuitikon  in the Göttingen series).

As scholars have reassessed the readings of the papyri of Leviticus (4QLXXLeva, 4QpapLXXLevb and Schøyen MS 2649), they have come to conclude that more of those readings reflect the original translation, the Old Greek of Leviticus, than Wevers once thought. Moreover, at the same time, septuagintalists have shown Leueitikon in Vaticanus, along with the other codices, to reflect one or more recensions from an original Old Greek translation (Himbaza, Kreuzer, et al.). This means that we need to be careful to mentally distinguish not only LeuB and LeuA from the putative Old Greek, but also Wevers’ critical edition as well.

Give us some of your thoughts on the language of Leueitikon and how it was read and understood in the Byzantine period.

My focus was on those Koine features that Byzantine Greek readers — not accustomed with the Hebrew grammar and syntax on which the Greek is so obviously based — would have readily comprehended. While Byzantine readers would have lost the Greco-Roman religious and political connotations of the Koine lexical choices, they would have known the basic meaning of those words, especially through Greek syntactical relationships and larger units of discourse (context). My interest was especially in the syntax and structure of units, leading to meaning, which contributes to the theological contribution of each unit. I also spilled a good bit of ink on intertextuality, especially with LXX Exodos. In and out of such literary investigations I interweave quotations from some of Vaticanus’s Christian contemporaries, such as, Eusebius, Chrysostom, Jerome and others. “By including the voices of the church fathers, we may or may not be hearing the early reception of LeuB, but we are hearing its Zeitgeist” (p. 11).

You also produced a translation for the commentary. What was your approach, especially in light of the qualities of the Greek language?

My approach was to produce a formal-equivalence translation, although there are some occasions where I offer more dynamic renderings when the Greek context and English usage clearly would have so informed the early readers. I try to follow contemporary (American) English usage, which meant I preferred “must” to “shall” (NETS), and the like. In my more literal translation, I could not see a way around the patriarchal sociolinguistic culture of the LevLXX translator — masculine inflections are the default, even when women were clearly also included. The result of a formal translation, I think even more formal than Büchner’s great translation (NETS), is that one immediately feels the Hebraic syntax now enfleshed in Greek terminology. Even so, as Muraoka has shown, many, but certainly not all, of the syntactical features of the LXX can be made sense of through known Koine syntactical conventions.

The intertextuality of Deuteronomy with the Leviticus, in one direction of influence or the other, has been a fascinating, recent domain in Hebrew Bible/Old Testament studies (Otto, Kilchör, Nihan, Stackert, Arnold, et al.). One could also pursue how the Greek readers of LXX Deuteronomy reflected back on preceding (in the canon) language of LXX Leviticus. Even more fascinating, how was the Greek translator of Deuteronomy influenced by the Greek Exodus-Leviticus-Numbers.

Through my survey of the Leviticus cult/tabernacle/temple motif in the NT writings (pp. 23–28), I am convinced that the LXX of Leviticus played a major role in NT interpretation of Jesus the Messiah and of the nature of the church. Further NT research on the inner-biblical use and adaptation of the sacrificial cult motif in the LXX of Exodus-Leviticus-Numbers could yield fruitful results.

I’m grateful for the opportunity to feature this volume on the blog! Hopefully we will see more volumes in the SEPT series in due course.